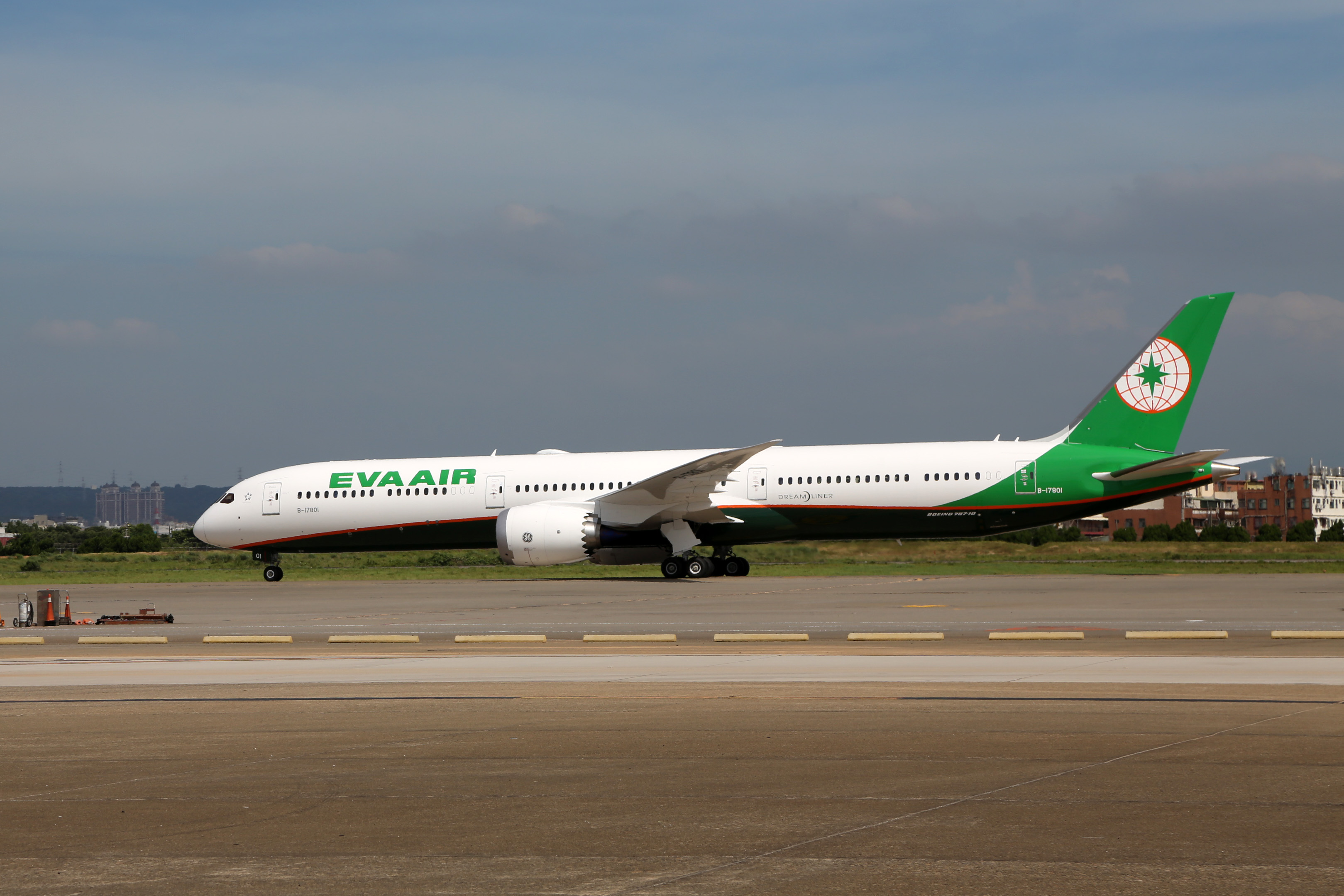 EVA Air took delivery of its first 787-10 Dreamliner, aircraft number B-17801, at Boeing South Carolina on June 19, 2019. EVA Engineering & Maintenance Division Executive Vice President Chun-yi Kuo led a team of colleagues to welcome the new aircraft and signed commemorative certificates with Brad Zaback, Vice President/General Manager, 787 Program and Boeing South Carolina. After a ferry flight of approximately 16 hours on the next day, the 787-10 arrived in Taoyuan International Airport (TPE) at 2:30pm on June 21, 2019.

EVA is adding 24 Dreamliners to its fleet, including four 787-9s it is now operating. Following this first 787-10, the carrier will take delivery of three more and by the end of 2019, will be flying four of the latest-generation Dreamliners. EVA will complete its Dreamliner deliveries by 2022.
The Boeing 787-10 has a range of 5,900 nautical miles fully loaded, capacity to fly from Taipei to every major destination in Asia and as far as Brisbane, Australia. EVA is configuring its 787-10s for 342 passengers with 34 in Royal Laurel Class and 308 in Economy.

With the delivery of this first Boeing 787-10, EVA is ready to put these advanced aircraft to work on its most popular regional routes. The airline will introduce the new plane on its busy Taipei – Hong Kong route starting from June 28 and a short time later, extend the aircraft’s operations to Japan and more destinations in Mainland China. EVA will begin flying 787-10s to Brisbane, Australia in the fourth quarter of 2019.The airline is using its 787-9s on its Tokyo, Osaka, Nagoya, Hong Kong and Vienna routes. EVA plans to begin Dreamliner service to Vancouver in the first quarter of 2020.

Technologies used to build the Boeing 787 Dreamliner make the aircraft more environmentally efficient than other aircraft. The fuselage, wings, engine blades and more are constructed of lighter composites such as carbon fiber so that more than 50% of the plane’s total weight comes from these materials. Compared to traditional aluminum alloy fuselage construction, the advanced materials significantly decrease the aircraft’s overall weight and likelihood of metal fatigue or corrosion, reducing maintenance costs. Replacing fluorescent tubes with LED lights shrinks power demand by almost half.

Boeing also engineered its Dreamliners to enhance cabin comfort. The Boeing 787 is equipped with an advanced air filtration system that improves cabin air. The fuselage is made of a combination of composite materials that make it more airtight. Compared with other commercial jets, the 787’s cabin humidity can be increased as much as three-to-four times, eliminating the drying inflight atmosphere. The aircraft’s cabin pressure can also be controlled to make the altitude feel like the optimal 6,000 ft. instead of the standard 8,000 ft., boosting passengers’ blood-oxygen levels and reducing headaches and fatigue. Newly designed engine housings significantly reduce noise and give passengers quieter, more comfortable inflight environments.

About EVA Air:
EVA Air is a Star Alliance member and one of only 11 SKYTRAX-rated 5-Star airlines worldwide. Readers voted it one of Travel + Leisure’s World’s Best “Top 10 International Airlines” and TripAdvisor awarded it top spots in five categories in its annual Travelers’ Choice Awards for Airlines. The carrier was established in 1989 as Taiwan’s first privately owned international airline. It is part of the respected Evergreen Group and a sister company to global container-shipping leader Evergreen Line. It flies a fleet of more than 80 Boeing and Airbus aircraft to over 60 international destinations throughout Asia, Oceania, Europe and North America where gateways are Chicago, Houston, Los Angeles, New York, San Francisco, Seattle, Toronto and Vancouver. Travelers can learn more about EVA and schedule, book and buy tickets at www.evaair.com.